The cryptocurrency market is cooling off a little after this week’s exuberance. It’s down by 1% in the past 24 hours, with bitcoin (BTC) and most major coins falling by comparable percentages. However, with overall sentiment remaining largely bullish, it’s likely that the rally could kick off again soon. Accordingly, we’ve compiled a list of the 5 best cryptocurrency to buy for the weekend rally. While these coins all have a very good chance of jumping in the next few days, they also have great long-term potential.

5 Best Cryptocurrency To Buy For The Weekend Rally

As its 30-day moving average (red) shows, BTC is still in the midst of a significant upswing. At the same time, its pullback yesterday has pushed its relative strength index (purple) below 50. This means some of the excess heat has been removed from its market, and that there’s renewed space to enter.

And of all the major cryptocurrencies, BTC really has the best chances of rallying this weekend. It has been riding high ever since the SEC gave the green light to the ProShares Bitcoin ETF. With more Bitcoin ETFs likely to follow, confidence in BTC’s future is only growing. And when you add rising inflation into the mix, the chances of BTC ending the year with a series of new highs are now rising enticingly.

Indeed, this week’s rally has added credibility to the stock-to-flow model, which predicted $63,000 around this time of the year. It also predicts more than $100,000 by the start of 2022. 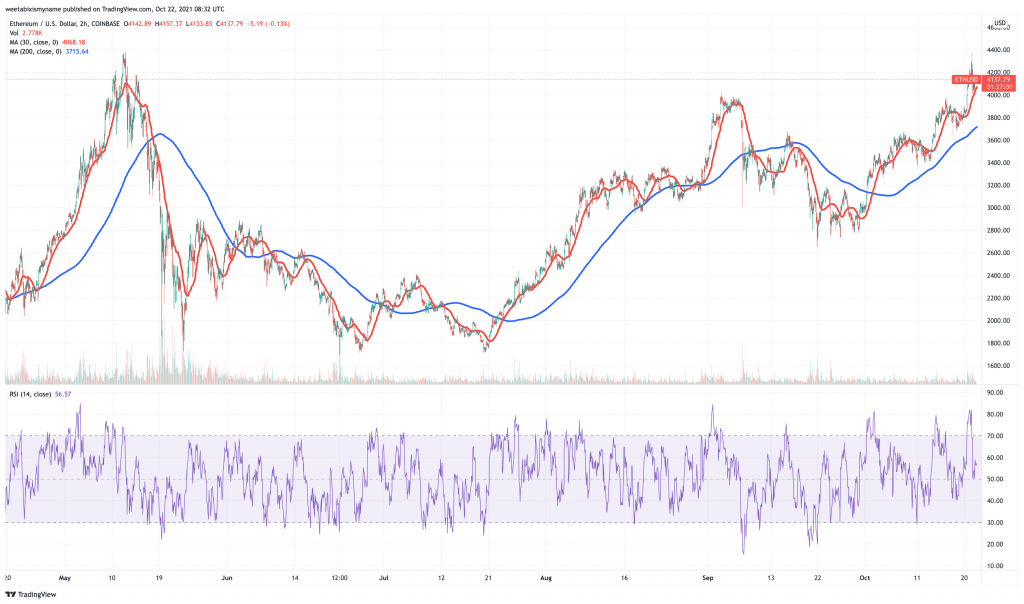 ETH’s 30-day average is also riding well above its 200-day average (blue), indicating a new level. And as with BTC, its RSI has cooled off after entering overbought territory yesterday. This suggests that short-term (if not long-term) gains are there to be had.

Ethereum is another platform about which there’s every reason to be bullish. Indeed, even JPMorgan is starting to champion ETH, with a  a report from a couple of weeks ago revealing that some institutions are beginning to prefer ETH over BTC.

Why? Well, because ETH has become a deflationary cryptocurrency ever since Ethereum’s London upgrade of early August. That’s because the upgrade results in a portion of transaction fees being burned.

At the same time, more ETH holders are sending the cryptocurrency to Ethereum 2.0’s staking contract, in anticipation of the move to proof-of-stake next year.

A breakdown on the #Ethereum staking contract.

The Ethereum 2.0 staking contract has become the largest holder of $ETH.

There are now 7.84m ETH, meaning that the contract has been growing at a pace of 23,442 Ether per day, with a total 51,200 unique addresses depositing. pic.twitter.com/VTlYy6AWyg

This all creates a perfect storm of conditions ripe for ETH to surge strongly in the coming days, weeks and months. This is why it’s one of our 5 best cryptocurrency to buy for the weekend rally. 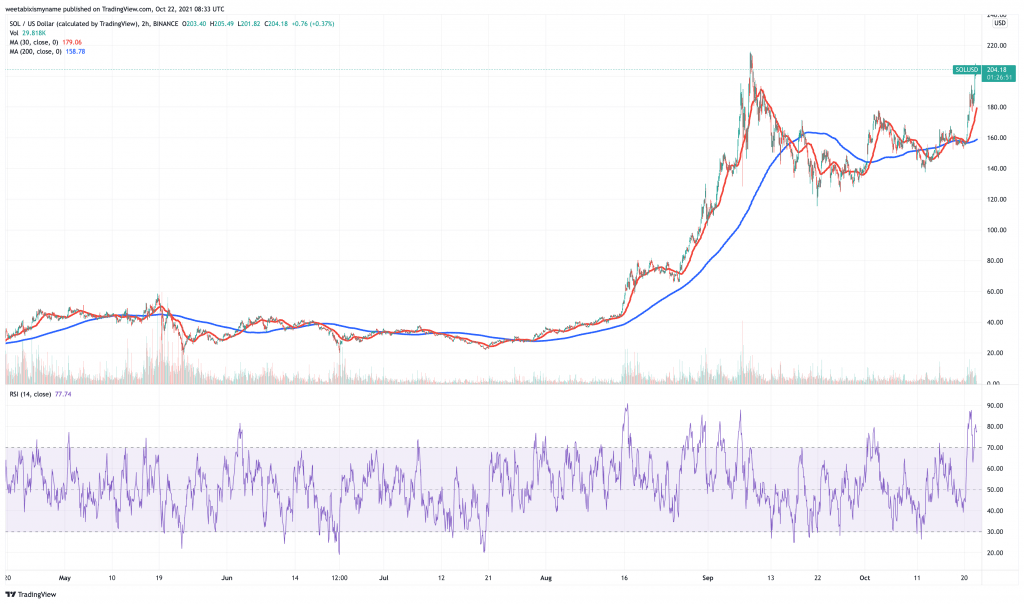 SOL’s 30-day average has raced ahead of its 200-day average in the past couple of days, indicating a breakout. This has only just occurred, so even though SOL’s RSI is at 80, the rally still likely has some time left to run yet.

It has also seen to launch of new apps and protocols in recent days.

At the same time, its existing apps are growing in popularity.

In view of such growth, it’s no surprise to learn that the total value locked into Solana has grown to a new record high. It now stands at $12.5 billion, having been only $1.2 billion as recently as the start of August. 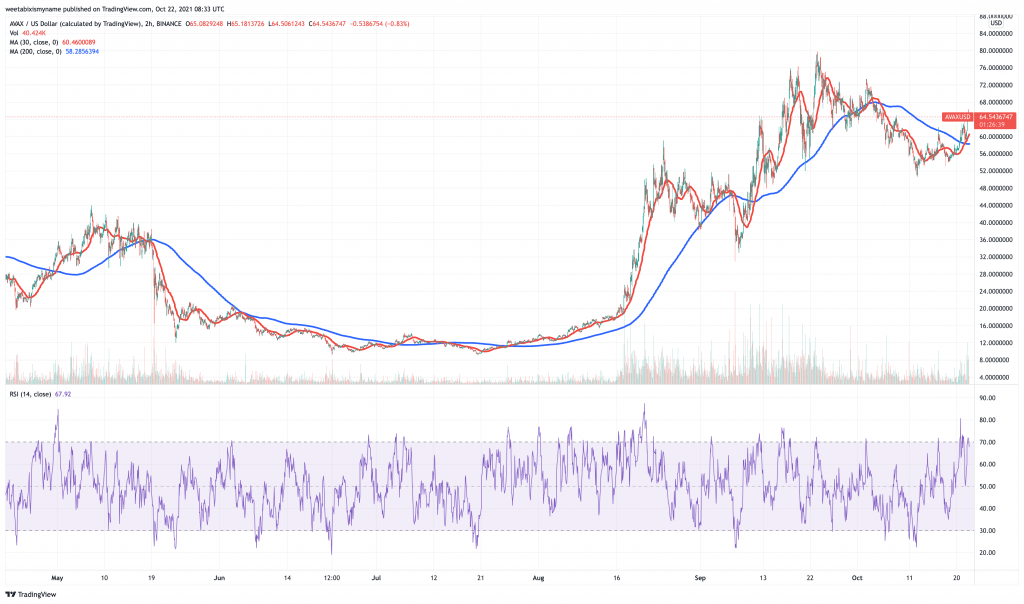 AVAX has just begun to overtake its 200-day average, suggesting that it’s another coin beginning a breakout. As with SOL, it’s also in ‘overbought’ territory now as far as its RSI is concerned.

However, Avalanche’s fundamentals suggest that the rally can continue expanding to accommodate new buyers and growing bullishness. Its total value locked in has risen to $7.73 billion in recent weeks. It accounted for only $2 billion at the beginning of September, as well as $4 billion at the beginning of October. In other words, its total value as a network has nearly doubled in less than a month.

And Avalanche is likely to be growing in the long-term too. In mid-September, Polychain and Three Arrows Capital invested $230 million in the platform. This highlights the kind of resources it now has behind it, and how it would be unwise to bet against its growth.

📢 BIG News 📢@Polychaincap and Three Arrows Capital led a $230M investment in the #Avalanche ecosystem to support growth of the platform.https://t.co/T141NFEoIG

Another reason for its recent growth is that it launched the Avalanche Bridge back in August. Linking Avalanche with the Ethereum blockchain, this has now facilitated over 100,000 cross-chain transfers. It’s a big part of the story of AVAX’s recent price increases, as well as a big part of the reason why we’ve added it to this list of the 5 best cryptocurrency to buy for the weekend rally.

After flying below the radar a little over the past few months, DOT looks ready to capture the market’s attention once again. It’s up by 2.5% in the last 24 hours, rising to $45.59. It’s also up by 12% in the last week and by an impressive 75% in the last 30 days. This makes it one of the best-performing cryptocurrencies of the month. 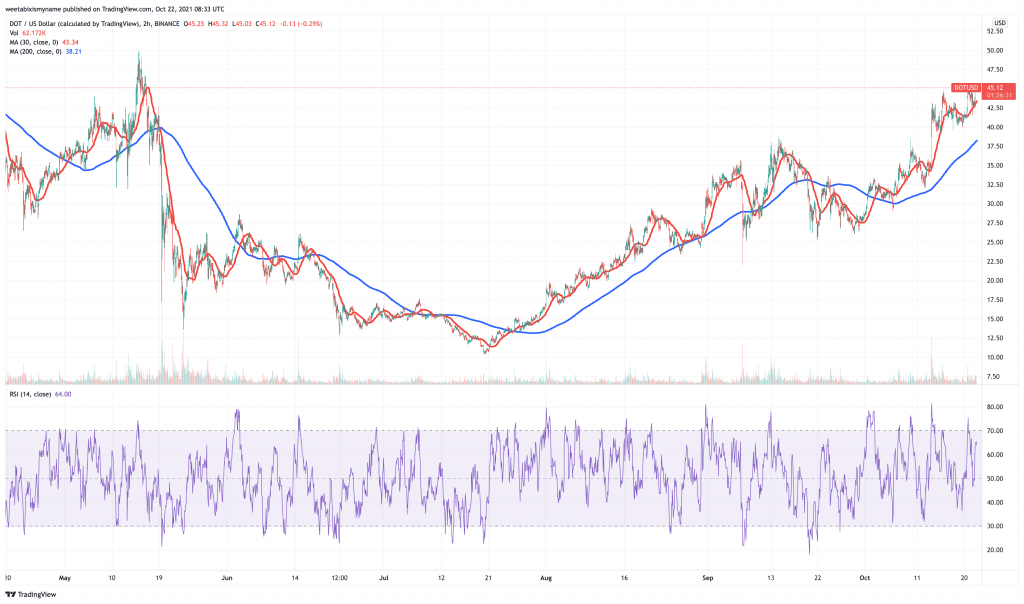 And in the longer term, it’s likely that DOT will continue to grow. This is largely because it has parachain auctions coming up next month. The network’s governance structure last week voted in favour of holding such auctions, which will decide which projects get to run on Polkadot.

Once Polkadot’s community ratifies last week’s vote, auctions will commence on November 11. Once parachains are launched on Polkadot, demand for DOT itself will increase significantly. DOT will be needed to bond new parachains to Polkadot’s central relay chain. At the same time, it will be used for staking and governance, as well as for paying transaction fees. So expect $45 to seem very cheap quite soon.